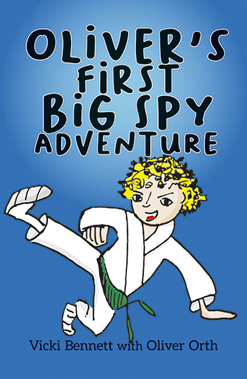 Oliver has been secretly training as a spy all his life. On an ordinary afternoon after school, he overhears two suspicious-sounding men talking about bacteria, AK47s, vicious dogs and a mysterious island. His grandmother takes off after them – proving to Oliver that she really is a spy.  Oliver follows them; knowing that this is what he’s been preparing for all his life. When two men leap from a black van and abduct his grandmother, Oliver’s first big spy adventure begins. Showing great resolution and courage, Oliver is kidnapped, tied up, chased across a field by guard dogs snapping at his heels, catches a train, hires a taxi, rides a horse, is shot at with a machine gun, drives a boat and is hopelessly lost in the open sea. He is brave and resourceful, but can he help his grandmother escape? 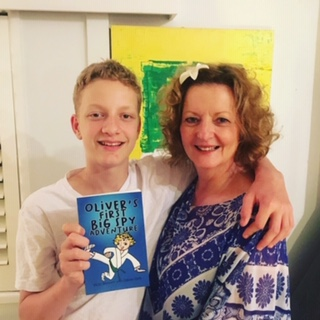 Vicki Bennett and her grandson Oliver Orth began their spy adventures after school when Oliver started talking about his inner life as a spy.  We had so much fun with these stories, we decided to write Oliver’s First Big Spy Adventure, a lovely story about a 9-year-old boy and his inner life as a spy. Creating stories about a boy his age who wants to be a spy was a great adventure for us both. This book is written for 9 – 12 year olds.

They are planning another book, Oliver’s Big Singapore Spy Adventure. Where Oliver visits his cousins for his tenth birthday, at least that’s what they tell his mother.