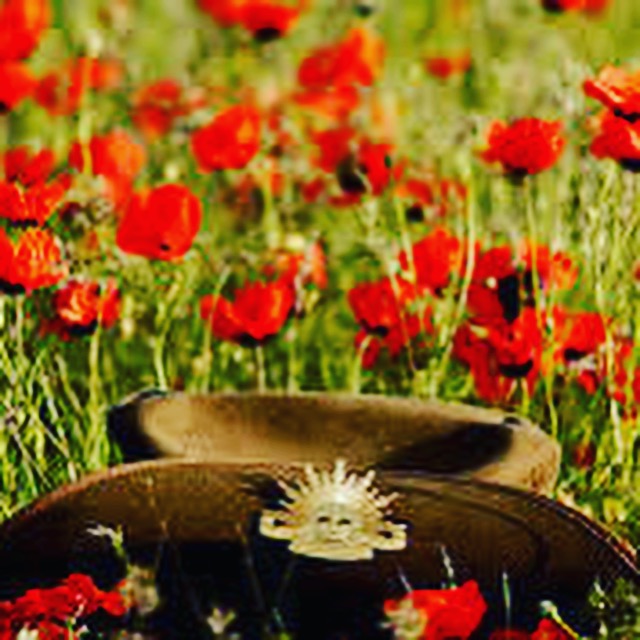 Anzac Day has always been a special time for our family. Ever since I can remember we’ve been up early for the Service, then morning tea at the RSL Sub-branch and a rush to get Dad to the march in the city on time. He’s always marched on Anzac Day and this is the story of his last Anzac Day march in 2007.

It was a bit of a rush, finding the place where the Jeeps were assembled. The traffic, parking the car, getting Dad out of the car and his walker out of the boot.

Earlier in the week I had talked on the phone to a man called Rocky from the RSL. He was coordinating the Anzac day parade and said, ‘Come up to the corner of Elizabeth and George Streets and we’ll set your Dad up in a Jeep to march in the parade.’

Dad’s first march after World War 2 was in Shepparton, then Geelong and now Brisbane. I guess he thought he would be young forever, but lots had happened since last Anzac Day. His sweetheart had died, the partner he believed would be beside him forever. Then he fell over and broke his hip, then two heart attacks and a stroke. Pretty amazing for him to be still alive and he was determined to march with his “9th Divvy” mates.

So the volunteers lifted him into the Jeep, a real one, with left hand drive and he was set, a bit shaky but ready to go. I reached up and brushed his suit jacket and kissed his cheek. Off to get a good position to watch the march.

The 9th Division flag waved gallantly up the street and there he was, in the first Jeep behind it. Then I caught a glimpse of the past and there I was, a little three-year-old girl, standing on the side of the street in Geelong, on a cold sunny day. I was dressed in a tartan skirt, wooly jumper, red tights and a little blue coat. I was holding my Mum’s hand; she was dressed in silk stockings, matching shoes and gloves and a pale blue wool suit topped off with a sharp buttermilk yellow hat, smelling of something sweet and flowery.

We had arrived early so we could be close to the kerb at Moorabool Street, outside the newsagency. Mum was anxious, how was I to know my baby sister Elizabeth had died in the hospital two months before? It was Mum’s first outing since. She held my hand tight on one side and my brother’s hand on the other.

And there he was, the strongest, tallest, bravest man I ever knew marching along the street in his best black suit, under the shadow of the 9th Division banner. His green felt hat was at a jaunty angle, his medals a blaze of courage across his chest. I swallowed hard, surprised and thrilled. ‘Daddie’ I yelled as he found me in the crowd. And for a moment he stopped staring ahead and looked at me and smiled the softest smile. ‘Daddie,’ I called again and he waved and waved again, his sweet smile, ear to ear, then he proudly looked forward and caught himself back up into the rhythm of the march.

There he was, sitting proudly in the Jeep, not marching on his legs but in his heart and spirit, marching for his life.

This essay was first published in The Australian in 2008.